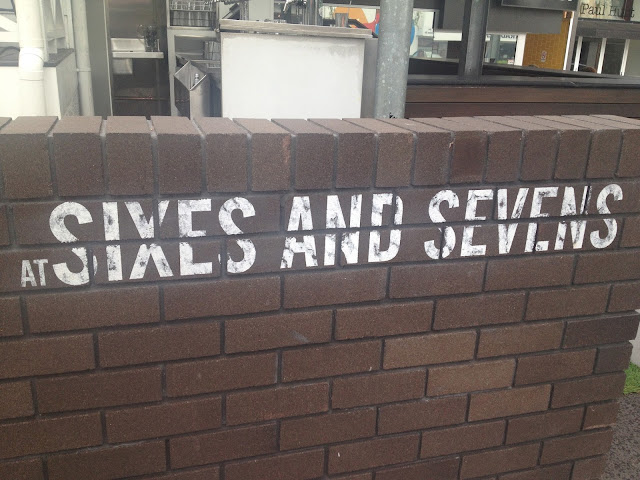 I feel well out of sorts, and I'm not keen.

I don't know exactly what it is, but it could be related to the cat. He's sweet, he really is - and there's nothing like the hit of warm honey I get when he touches his face to mine - but he's nervous, and I think I'm responding to that. I feel like a stranger in my home; I keep misjudging spatially, can't move round the house with ease, am not sleeping right. But why would the house feel different?

It feels different without Frost, of course. He was louder and he swaggered about from the moment he arrived. I feel less upset now, but I still can't believe it has happened, that he's gone. I expected feelings of loneliness, but not this strange, disjointed feeling of things being slightly 'off'.

I've done nothing in the house since before he disappeared, and everything is physically and metaphorically encroaching onto my peace of mind. I do need to sort that - perhaps I would feel like it was my home again. I wish my session with Barbara had helped more - paying £50 for a catch up was frustrating, when for months I've been looking forward to properly offloading.

As ever, Lynsey and Nichole have been loving and brilliant. But with everyone, I feel I'm putting on a friendly face (though not very well); I'm irritable, I have no interest in anyone and want to be on my own. Look at what happened with Kate. That was awful. I'm finding it hard to give a shit.

I just rang the Blue Cross Bereavement Helpline. Who knew it existed? I spoke to an elderly lady who was very kind. She said, "Not all pets are special. Some are just very nice." She said she'd pray for me. I didn't realise til I started speaking to her how upset I still was - so ignore what I said above. This weekend I should start trying to draw that picture of him, because he was one of the special ones and I need to remember him.

I don't regret getting little Artie. He's going to need more looking after, but I can do that, and I can love him. We just need to figure out how to be together. The only trouble is people thinking I'm no longer sad when I am; there's no replacing a certain personality in your life. There are just new littles to meet and provide a happy home for.

I've felt like I'm going through a fallow period, so maybe I need to embrace it now. Look forward to Christmas, festivity, decorations and ginger wine. With my little cat, and his smell of warm honey.
Posted by Reddest Roar at 12:07:00 No comments:

Hi Joanna, or perhaps Joey - as you're probably still called.

I don't even remember how you think anymore, twenty years on. I remember you being quiet but not noticing; I remember you having the stomach to wear cropped vests; you rarely wore makeup; you idolised James' sisters; you thought you were cool. But no probs there - everyone thinks they're cool and original when they're younger. It becomes more nuanced later - so enjoy, keep trying things and keep doing what you're doing.

You have some interesting, fiercely loyal friends. Treasure them. Lots of strange people will come and go, and many of them you won't like. That's fine. Accept that and accept some won't like you. You're happy enough as you are. Later you'll become more worried about people liking you, but really, 80% of them don't matter. I want you to know that only the people you like are important - and I wish you'd learnt that sooner.

On a more positive note: you've got some brilliant experiences coming up. You'll feel the rush as your friends stand up to cheer you getting Deputy Head Girl, you'll love being a student (rather than a pupil), you'll land yourself a job - waxing lyrical about Graham Greene - that puts you in touch with magical literature and film, famous people you admire, and a truly overwhelming and passionate love. You'll feel flirty and attractive and vivacious. You'll push yourself through really tough interviews, for art college and for high-level jobs, and you'll get some of them through pure, infectious passion. More amazingly still - at least it seems to me - you'll take time out from the world in your thirties to do an MA (a brilliant collaborative experience), make some great contacts and get a job as an Associate Editor for an analytical science magazine. Shocked? Me too. You don't study science again, and you don't hear about the existence of analytical chemistry until the winter of 2015. Yet I write this from a hotel room in Minneapolis, at a conference for that very subject. You'll write about volatile organic compounds and surface-enhanced Raman spectroscopy and characterisation of biosimilars and the only person who will be surprised you can do it is you.

There'll be breakups, of course. Everyone has those. Just brace yourself for 2011/12, that's all. I don't know if you'll feel love like that again - I'm 35 now, and opinions are mixed - but you'll be dizzy with joy when you have it. SWIM in that feeling; it's incredible. People will make comments about the number of boyfriends you have, but screw that. It may be 20 years before you truly spend time alone, but these people will put you in touch with feelings, experiences and friendships you may not have encountered any other way. Just promise me you'll be kind to Alan - he didn't deserve being screwed around.

FEMINISM. Prepare yourself. It'll be like someone waking you up. Expose yourself to it and stay openminded, and - fruitless as it is to say it - don't take it too personally when people disagree. Not everyone is the idealist you are. I don't have to tell you that sometimes you get it wrong, because you'll always be hyper-aware of that. I wish I could take that away. You learn social strategies - to such a degree that people don't believe you're an introvert - but you will go through some excruciating periods of beating yourself up every time you open your mouth. Some will get you, though, and some will like you. Some will love you. Trust them when they say it.

You'll obviously feel the need to 'break out' from Burnley and family, and that's natural - go for it. Living in London (which you'll do) will be tough but will expose you to so much and will make you the independent person you are later on. (When you go to New York, at 34 years old, you'll hop on the subway to Brooklyn without a second thought - and love it.) You'll come to rely so heavily on Mum and Dad, though. They have their moments, but they're incredibly supportive of you, proud of you, and do so much to help you financially, practically - and even emotionally. You'll always know they love you, and you appreciate that as you get older, believe me. You and Jess will reach a nice stage too - though even now I suspect that's an ongoing process.

There are so many things I could mention: the shoes, the fashion blog, the older men, the dicks you'll meet...but there's so much. You get 22 moves, two cities and about 15 lovers into 20 years. What might make you laugh: Paul, your first proper boyfriend, the trainee footballer - who you'll go out with for all of three months - will be the best hairdresser you know 15 years later. He'll also perk you up after the heartbreak I mentioned.

So where does that leave us? I don't know how to sign off. I just wish I'd had a me when I was you. You're the best friend you have, and I wish I could convince you of that. I don't think I'm fully grasping that yet. I love you though, 1995 Joanna. Just please do try your hardest to love me.
Posted by Reddest Roar at 17:25:00 No comments:

So...this may be it. I always pride myself in being able to smell the change of season, but this time, for whatever reason, I've missed it.

Like many people, I'm secretly glad. Love seeing the sun, hate being in it. I like tights, jacket and snood weather. Not having freak outs every time I may have to show a bare limb. Boots. And again, like many people, I enjoy the symbolism of Autumn. I've felt for some months that I've been in a kind of hibernation, regrouping, reassessing, going through some kind of minor metamorphosis, and now the season reflects that process. At the same time Autumn makes me feel like I'm coming back to myself; I'm the colour of autumn, I'm built for cooler weather, and that Vermont-esque beauty of turning trees makes me heart soar like no 30° heat ever can.

It is time for me to let the dead things go. People, sadnesses, memories, hang-ups, even old Joannas in their many costumes and guises and behind their many masks. More than any other time, it feels like starting again from scratch: new exposed skin, unshaped persona, a gaining of self-perception and formation of a voice. Friends and family reassuring in their consistency, anchoring.

There are many threads that have run through my relationships and time. It feels like nimbly plucking all the thick, red threads from among the tangle to stitch together someone new and whole. It's at once intricate and beautifully simple, laborious and dream-like. It can't be rushed, but by the time the last leaf falls - the last dead thing - it will be more tangible, more cohesive, more authentic. 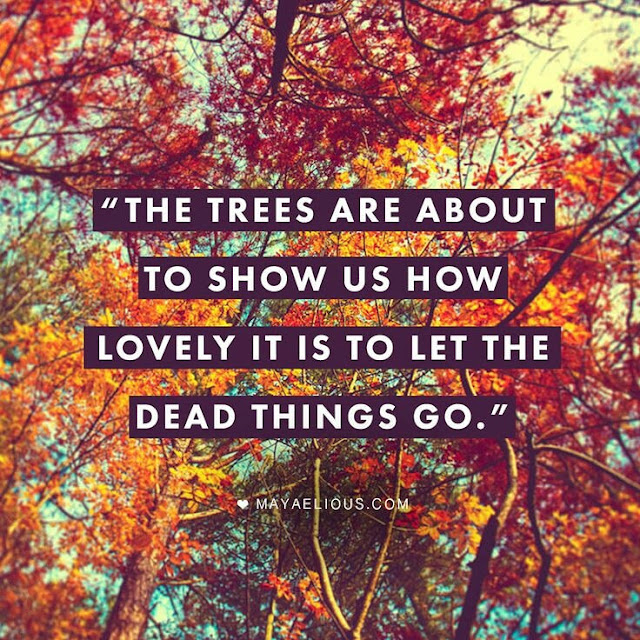 I have to say I always thought the idea of a bucket list was quite naff. While I'm sure swimming with dolphins is an exhilarating experience - and I'd do it myself if I wasn't sure I'd mistake them for sharks - it seems a bit of a twatty thing to wish for as a girl from Lancashire.

That said, I know you don't have to wish for twatty things, or even anything totally beyond the realms of possibility (if you have the funds to cross world travel off your list, power to you). For example, I want to go to the ballet. Blame it on my love of dance, blame it on Noel Streatfeild, I anticipate the choreography, the strength - and goddamn it, the costumes - giving me a girlish thrill. So I'm starting my own bucket list. It's a bit meagre and it's unlikely to be original, but when days are grey, it brightens me to think of the time I have ahead and the ongoing potential to be amazed and excited by something new. Incident is one of the Six Psychological Hungers, you know.